This morning we learned the downside of camping by a river in a valley as a fog had rolled down the mountain. Our tents were no defense against it and we awoke to a general dampness that soaked through all our clothing. Despite that things were warming up, (it was supposed to hit the mid 90’s in the afternoon), so we quickly dried off. Any thoughts of swimming in the river were short lived though when we saw a snake swimming in it. I’m getting better with snakes but still they freak me out enough that I wanted no part of that.

Wiki was having serious shoe issues, as in his new shoes were turning his feet into hamburger, so Owl volunteered to go into town and rent a car so that they could stop by an outfitter. Wiki couldn’t do that on his own as A) He didn’t have an American driver’s license, and B) Was only 19 so no car rental place would serve him. I on the other hand would continue hiking and then meet them in Glassgow in two days.

Today was all up with a quick hop over Fork mountain followed by a 3k elevation climb up Apple Orchard Mountain. Well I guess that means there was some down, but I don’t remember it 🙂 Around noon I took refuge in Bryant Ridge shelter, which was a good shelter to do so in as it had three levels and was fairly new. More to the point it was well ventilated which helped make the heat bearable. I stayed there for about three hours as the last thing I wanted to do was climb a mountain in 90+ degree heat. As I was laying there I thought I saw a mouse tail wriggling in the rafters until I realized it was another snake. It didn’t drop on me so we were cool with each other.

Unable to put it off any longer I started to climb Apple Orchard around 3pm. Any other day it wouldn’t have been so rough but it that heat it was miserable. Part way up I stopped to text with Owl and he said he knew it was bad since he had never seen me use so much profanity before. That being said I made progress and stopped by Cornellius Creek Shelter around six to read the shelter log and refill my water. It was filled with hikers who had originally planned on making it to the next shelter but had been battered by the heat and the climb so were calling it a day. I was *very* tempted to join them but I was on a timeline if I was going to meet Owl so I continued on.

As dusk was setting I switched on my headlamp and was making good time on the trail until some ancient threat avoidance section of my brain flickered on and I found myself jumping back. It took me a second to realize that a big snake was laying across the trail. It took me a bit longer to see the rattle on the end of its tail and identify it as a timber rattler. Very glad I did not step on that dude. I backed further up and proceeded to thump the ground to get it to move. No way I was tossing anything at it or poking it with my poles! Eventually it lazily slithered off the trail and after it had gone a safe distance I passed it by. At that point I had more than enough snake encounters for the day.

Having wasted enough time at this point I was hiking fully in the dark. It was fun though and I stopped on top of Apple Orchard mountain for about 30 minutes to look at the stars and watch a thunderstorm way off in the distance. By the time I reached Thunder Hill Shelter it was quite late but everyone was still awake as they were celebrating Oh Canada’s birthday. I stayed around a bit and cooked my dinner but there wasn’t good tenting and the weather was cooling off so I decided to continue on hiking. About a mile and a half later I came upon Thunder Hill overlook and figured that would be an amazing camping spot. Of course here I was camping in my orange tent, on a popular overlook right off the Blue Ridge parkway, where the legality of my camp site selection might be questioned, so that was a bit of a stealth camping fail. But it was right off the trail and there weren’t any no camping signs so I figured I could claim ignorance with a straight face if a ranger questioned me. Plus the view was awesome so I had a great rest of the night. 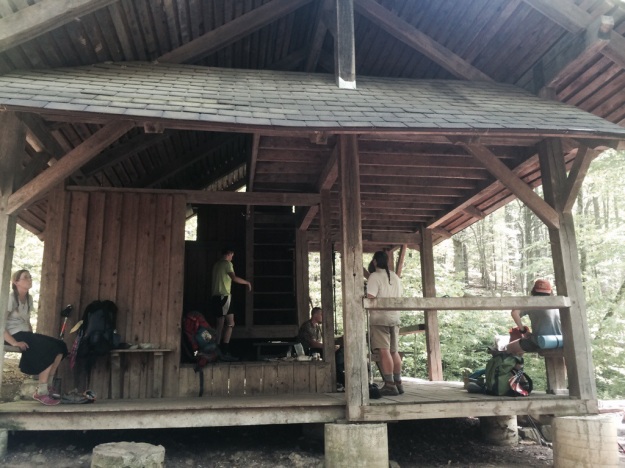 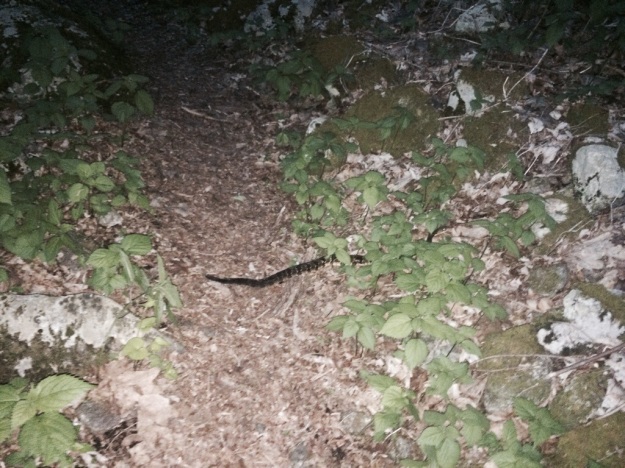