Waking up when it’s in the mid 30’s is much preferable to waking up in the 20’s. On rising we were all greeted by the spectacle of the dog Moose trying to mate with a rock. Hey, it’s better than MTV. Buddy had skipped out of camp earlier following the first hiker who left.

The hike today can be summed up as mushy and muddy due to all of the melting snow. We also had our first serious climb out of Horse gap. Another notable event was we both got our first blisters so we tried to take it slow. When it comes down to it though, today really revolved around Buddy.

We met Buddy’s owner by the first road crossing we passed, and he was … off… He said his dog had slipped his leash yesterday and when we mentioned we saw his dog the owner began rationalizing that his dog would probably find a better home with the hikers than with him. Also we had a hard time getting his phone number to give him a call if we found Buddy. Now that I think about it he didn’t have a car or hiking gear. Long story short neither B or I had a good feeling about him.

A while afterwards we ran into Buddy wandering the trail so we gave him some food. We didn’t have cell coverage which ruled out calling his owner so we figured we’d hike to the next road crossing and try to give a call there or find someone who could give Buddy a ride into town. That plan failed miserably when Buddy ran off soon afterwards.

The next time we saw Buddy was when someone jogging the trail came by with him in tow. We gave the jogger the owner’s number and said goodby to him feeling that Buddy was going to be ok.

Low and behold at the last road crossing of the day who should come running up to us but a very muddy and distraught Buddy. We didn’t know what to do so we picked him up and put him in the back of a day hiker’s pickup truck and then left a note on their windshield explaining the situation. We figure since they had religious bumper stickers they’d understand. We left Buddy peering over the side barking up a storm, but that was really the best chance of him getting home. B and I didn’t want to stick around because we weren’t all that sure how someone would take a muddy dog and two muddy through hikers messing with their truck.

We ended the day at Gooch mountain shelter, (Designed and built by Virginia Tech students). As expected it was packed but we’re getting to know these people so it was fun.

My pack in the shelter. I liked how it lined up with the graffiti 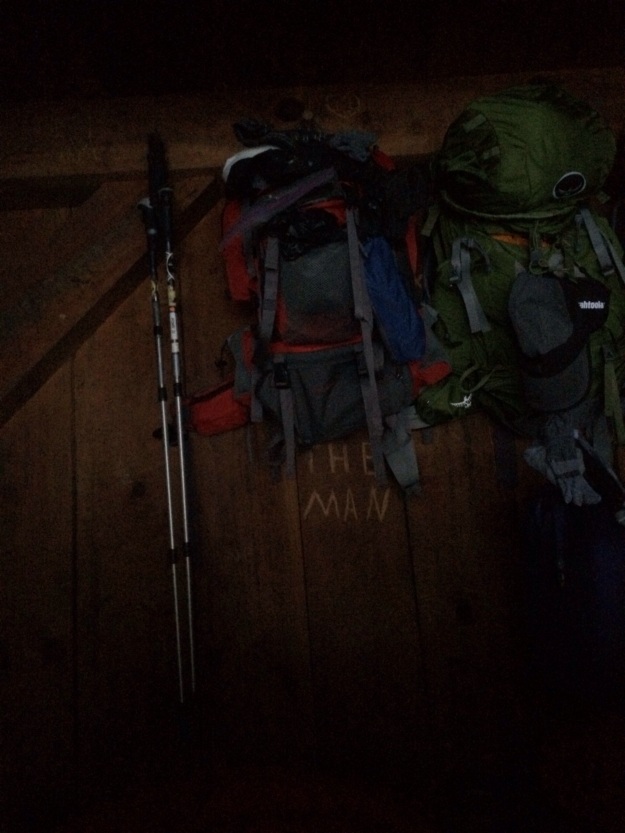 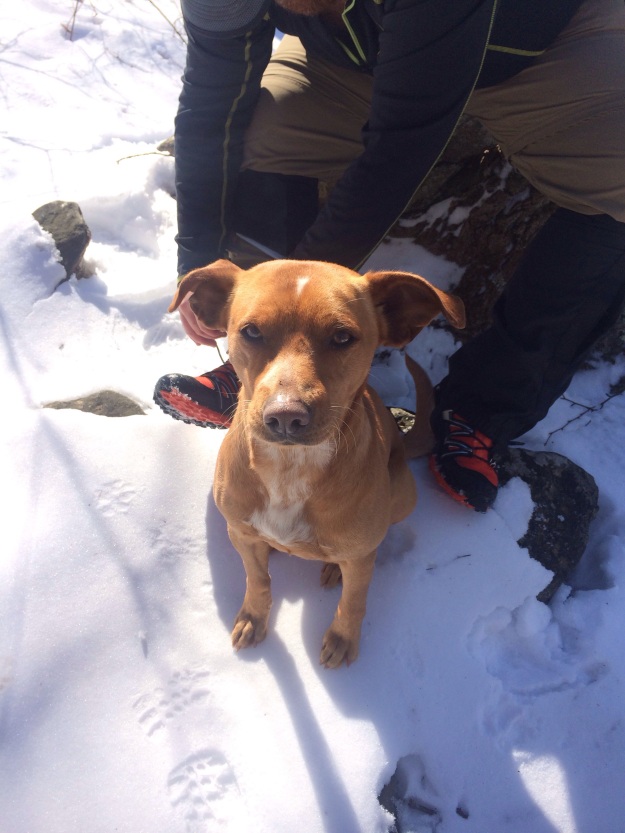