Finally! Today I hit the official halfway point for the AT. Since the trail is constantly changing, the midpoint moves from year to year so the only marker is a dinky little sign the trail maintainers move around. There was a more official looking marker a mile down the road, (I think it represents the midpoint of the AT in 1978), so of course I had to have my picture taken by both. This milestone was a long time coming and it feels good to know I’ve passed this hump. Admittedly it took close to four months, but please remember Owl and I started out doing 6-8 miles a day. Now we are routinely doing 14-18. So if we can both stay healthy the second half of this adventure shouldn’t take as long. That’s the plan anyway. I’ll admit when I started the trail I had hopes that I would finish in late July or early August. Now it looks like mid September is going to be the target date. On the plus side, this is one of the many reasons I started mid February. I certainly didn’t want to worry about running out of time before the endpoint in Baxter State park closed for the year.

Now the true celebration of reaching the halfway point is the half gallon challenge held at the country store in Pine Grove Furnace state park. The goal is to eat a half gallon of ice cream as fast as you can without throwing up or letting it melt into a disgusting goo. Even for AT hikers this was not easy and several people gave up while we were there. In the days leading up to this many strategies discussed on how to best tackle the challenge but when faced with the selection of flavors I forgot all of them and picked the dreaded Peanut Butter instead. I figured I didn’t hike one thousand miles to eat vanilla! Like many things in life it started out great and got progressively harder as time went on. A last chunk of chocolate peanut butter cup at the bottom almost defeated me but I prevailed with a time of 34 minutes!

Now, as I mentioned earlier I may have a case of the hiker hunger. About 30 minutes after finishing the ice cream I stopped back in the store and ordered a cheeseburger and chips. And that was just for lunch. There was a 25 year reunion of the AT class of 1989 and they were hosting a huge potluck. So that night I downed several hotdogs, lots more chips, various side dishes, and a hunk of pie. Besides the food, it was a great time to be there because it was fascinating to hear how the trail has changed over the last twenty five years. The equipment back then was heavier, there was worse maps and support, keeping in touch with loved ones was harder, and the camping food was worse. Basically I felt like a wimp compared to everyone else there.

Pine Furnace park was also the home of the AT museum. Currently it only covers one floor of a small building but still it was cool to see artifacts such as the gear some of the first through hikers carried with them. Once again it made me feel like I had way too much stuff. I mean, they certainly weren’t carrying around Kindles. The hostel we stayed in for the night was the old Iron Master’s house back when this place smelted iron. Considering Owl was a part time blacksmith, he was on cloud nine for this. Unfortunately they didn’t offer smithing work for stay. The hostel itself was nice and clean and I enjoyed sitting on the couch and working on my journal backlog. It also had a secret room that we all happily explored, but it was a little disappointing. It just lead to the area under the foundation and there was no pirate treasure to be found.

That was pretty much my day. Tons of cool stories, food, and secret rooms. Let’s see what the second half of the AT has to offer! 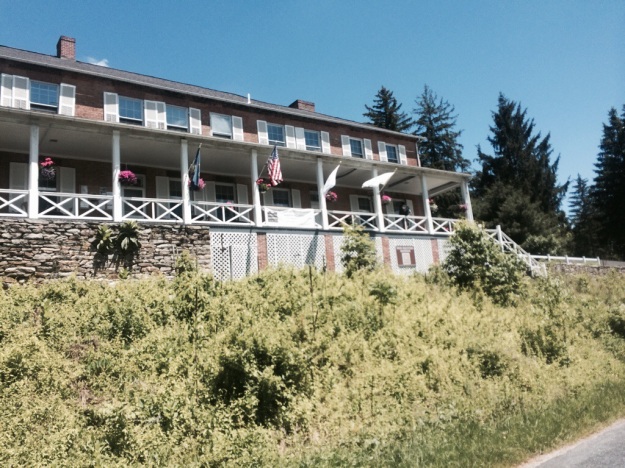 1 thought on “Day 114: Officially halfway done! Also the half gallon challenge is completed!”