Hey all,
The number of people reading this Journal and the responses I’ve gotten have really blown me away. So first of all “Thank You!!”

With family, friends, coworkers, and fellow hikers reading this I felt it might be worthwhile to devote a post to talk specifically about what it is like to blog on the trail.

First of all, it should come as no surprise that most of the entries are usually written a day or two after the day in question. I like staying on top of things but whenever I sleep in a shelter vs tenting I always fall behind. Usually the next day I’ll tent and spend an hour or two after sunset getting caught up but even then that’s not a sure thing. For example, In the Smokies where we have to stay in shelters I’ve gotten woefully behind. Usually when I start falling behind I’ll write a short “stub” entry containing a title along with my miles and ending location for the day. So when you see that, consider it a preview ;p

All my entries are written on my IPhone using the WordPress app. This allows me to compose entries offline which is a necessity considering my cellphone coverage. AT&T is not glorious in the mountains. When I do have signal I’ll then upload everything. So far it’s worked our pretty well and the lack of a real keyboard has proven much less annoying than I expected. The main pain in the butt has been autocorrect and special characters. Autocorrect should be fairly self explanatory and on the plus side provides some plausible deniability for sloppy writing on my part. The special characters are annoying purely from a formatting standpoint. For example, I’ll often accidentally inset spaces after apostrophes such as “won’ t”. #Nitpicky #IKnow

The main problem with the WordPress App is dealing with comments. For whatever reason the comment aspect of it is much more finicky in low signal environments so I usually don’t see comments until I get back to civilization. At that point I’m running around trying to get my act together or hanging out and enjoying being clean, so replies tend to range between late and non-existent. I apologize for that and I want everyone to know I appreciate all your comments!

Pictures and videos on the other hand are a real bear. If I don’t have wifi my chances if successfully uploading anything is iffy so I’m way behind on posting them. My plan is to eventually label the pictures as well but who knows when I’ll get around to that? Basically this is a living journal so you may see pictures posted a week or more after the original entry goes up.

Also some people, (my parents for one), may have noticed I stopped updating my SPOT location. Long story short, my headlamp batteries died so I had to cannibalize the SPOT’s batteries so I could move around in the dark. I have new batteries so I’ll start updating again shortly.

From a writing perspective I’m still trying to find my voice. I know my coworkers must be shocked that I haven’t included any lolcat pictures so far and my friends are scratching their heads at the lack of hashtags and emoticons. I certainly hope my writing style will evolve as this goes on so we’ll see what works. I also struggle with what to record. “It was a moderate day but Jacob’s Ladder just about did me in with the continuous steep incline” is boring to anyone sitting at home, but it’s a nice reminder to me, (seriously that section was a beast), and it might be helpful to hikers coming after me.

The only other thing I’d like to say is it’s hard to balance having experiences and blogging about them. I always feel antisocial when I’m typing on my phone while everyone else is hanging out. I also noticed today at the aquarium, (more about that later), that I was spending more time trying to get a picture or thinking about what to write than actually enjoying the moment. I need to work on that.

In conclusion thank you everyone for reading this and all the encouragement you have given me! Now it’s time for bed before I (hopefully) hit the trail tomorrow.

An awesome map my coworkers are keeping of my progress while I’m on the trail. You all rule! 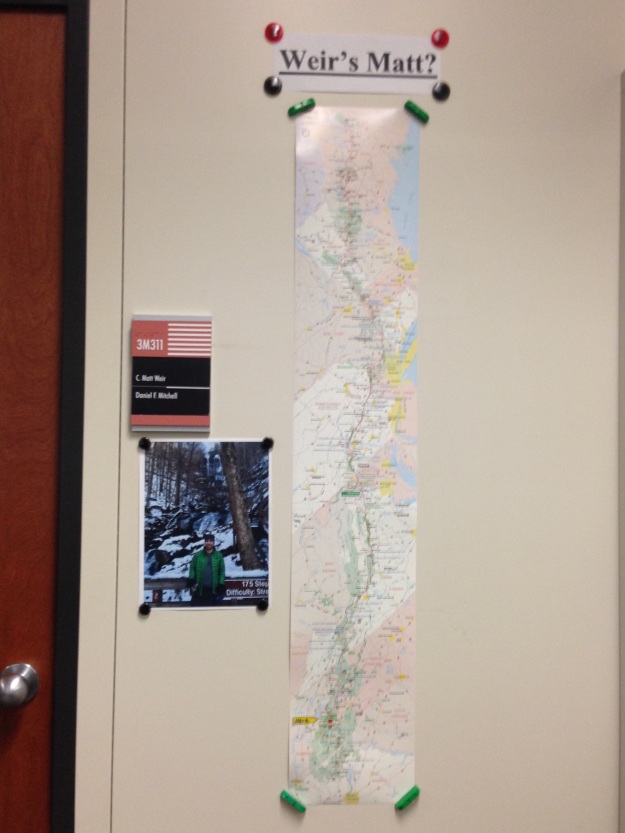 3 thoughts on “Editor note: State of the Blog”