Considering we were completely unproductive the previous night Owl and I decided to zero in Gatlinberg. The hotel had a very good complimentary breakfast, (Remember, do not stay at the Grand Prix), and I ended up spending the morning catching up on email now that cell signal and wifi were both available..

Since we had paid for a room at the Grand Prix we went over there to do laundry which turned into a three hour affair. One if the driers was broken and didn’t heat up, the owner knew it, and he still charged us another $1.50 to actually dry our clothes after the problem had been fixed. It’s not the money but the general attitude…

The rest of the day was much better. Owl and I grabbed lunch, I made a few phone calls, and then we went shopping for supplies. There was a satellite branch of the NOC in town which was better than expected. As Wiki commented, “Aren’t the spin off stores supposed to be smaller then the main one?” This NOC was much more hiker focused as well but it was mostly wasted on me as the only things I ended up buying were a new pair of socks and some supplements to add to my water, (basically powdered Gatoraid). Both of us were doing good on food since we originally didn’t even know if we would make it into Gatlinberg since Newfound Gap can often be closed due to bad weather, (insert ominous foreshadowing here). The best thing about the NOC though was that they had a climbing wall right in the store! When I asked the clerk about it they asked if I wanted to try so of course I said “Hell Yah!” When the question of which path to choose was raised, Owl piped up that anyone named Scrambles should always try the hardest one. That seemed to make sense at the time so up I went. Near the top there was one part with an overhang that I got completely stuck at so I eventually had to give up about three feet from my goal. It was still a respectable showing. I have been noticing myself loosing upper body strength lately but I just can’t bring myself to do additional workouts when on the trail. That will just have to be something I remedy when I finish this hike.

Dinner was once again at the Brewery, this time with more people as most of the rest I our bubble had rolled into town. It was a good night as we all joked around and traded stories. It’s funny how most of what we focus on involves the ins and outs of the human digestive system. For example Sunshine has a hilarious story about a six inch privy hole she dug and a frog that you absolutely have to hear her tell. It still amazes me how just about every day we all seem to gain new memorable experiences. 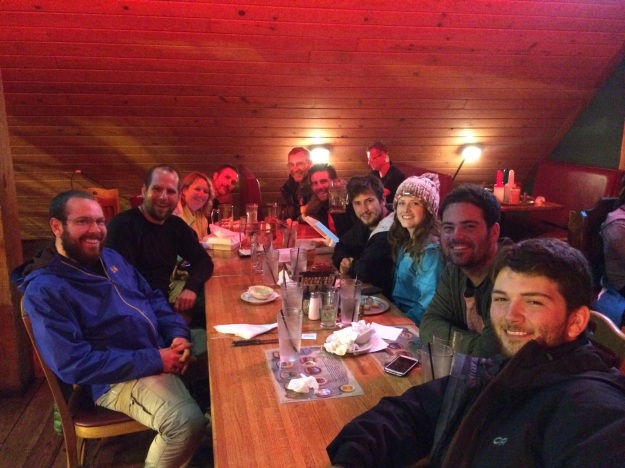