The title of this post pretty much explains today. I had my first snake encounter even before I left the campsite. I was making my way to the trail when another hiker exclaimed, ” I can’t believe you just stepped over that copperhead!” Sure enough, there was one slithering off the trail. I hadn’t even been looking for them since I wasn’t “hiking” yet. Later on, Youngbeard and I were hiking ahead of the group when a rattler in the middle of the trail announced his presence with a “If you take one more step I will mess you up!” tail shaking. I was cool with that. If the ratter had asked for my wallet I probably would have given it to him as well. Thinking back on it, I like rattlers much more than copperheads. I don’t want to step on a snake so if they let me know where they are, we’re cool.

By the time we saw our third snake, a harmless black racer which startled me, I may have yelled out a word that I did not learn in Sunday School. I was absolutely paranoid the rest of the day. I only saw one more black snake going up Raven’s Roost, but that was more than enough.

At one point Owl fell into some poison ivy so we had to split up so he could go to a nearby hostel to wash up. Sunshine, Youngbeard, and myself meanwhile did a crazy thing and all cooked a warm lunches while hanging out at the Cowall Shelter. It was glorious, I don’t know why I don’t do that more often. Oh yeah, I guess it’s because finding Mountain House meals is getting to be a bit tricky and we were there for over an hour, but still it was nice.

I think the climb up Raven’s Roost was Maryland’s way of saying, “See, I have mountains too!” What was trickier though was the climb down as it was covered in boulders. I believe that section was called the Devil’s Playground, and I can see why. Luckily no one fell and no snakes were encountered so life was good. We met up with Owl again at Pen Mar park; He had taken a side trail while we had been lazily eating our lunches and beat us there. His dad also met us at the park, as Owl had been trying out a hammock but after a couple of nights realized he preferred his tent. In addition his dad had brought dinner and fresh fruit for all of us so we all chowed down at one of the park benches.

Right after leaving the park we said goodbye to Maryland and crossed the Mason Dixie line into Pennsylvania and the North! I think all of us were Yankees at heart so it was a good milestone to hit. It was threatening to rain so we didn’t celebrate too much though and quickly made our way to an old abandoned forest road. We somehow managed to set up our tents there before a small storm hit. In conclusion, we finished the day with six states behind us and seven states ahead of us. It was a good day … Except for all those snakes!

Can you see the copperhead in this picture? Apperantly neither could I! 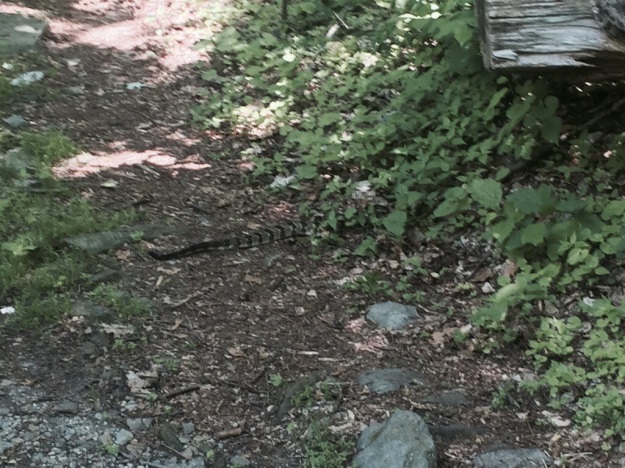