Both Owl and I had been hearing about Hot Springs for a while. It’s known as a hiker friendly town and more importantly it has actual hot springs! One former through hiker said that the key was to pick up a six pack, sit in the springs for an hour and when you get out it feels like you’ve been deboned. Since Gatlinberg was the last place we did laundry and we only had a questionable shower at Standing Bear, that sounded wonderful!

That’s a longer way to say both Owl and I were more than prepared to do a long mileage day to make it into town. The hike itself was fairly uneventful. We did run into some trail maintainers who were lugging a bunch of equipment up the hill. Not only did they make us feel like wimps with our nice backpacks, (Owl said when he finishes the trail he’s going to look into better carrying solutions for tools and donate them to these volunteer groups), but they also stumped us with a question about where the destroyed part of the trail was? We’ve gotten so used to climbing over trees or making our way through washed out sections that they are no longer memorable to us.

From a distance Hot Springs looks like a one horse town and that impression doesn’t change as you get closer to it. The trail runs right through Main Street and there’s no stop lights to worry about. Everyone had recommended Laughing Heart Hostel which is the first building you pass as you enter Hot Springs but after being burned by the last two popular hiker destinations we decided to walk through the town and see what other options were available. After checking them out, (not bad but they all had minuses like lack of wifi), we went back and got a room at Laughing Heart.

That turned out to be one of our better ideas. Laughing Heart is run by former through hikers Chuck Norris and Tigger. Chuck looked just like his namesake and had to be one of the must chill and happy individuals I’ve ever met. He also took a lot of pride in the hostel as the place was clean and he managed all the drama that a bunk room full of through hikers can bring. This was by far my favorite place we’ve stayed at yet and that includes the Holiday Inn in Hiawasee.

Both Owl and I grabbed the fried chicken special at the Smokey Mountain Diner. For $8 you were served fried chicken, baked potato, a huge slice of cornbread, and best of all, grilled asparagus! I had just been talking about how that was one of the random foods I had been missing.

The town pretty much shuts down at five so after dinner Owl and I retreated back to the hostel where I spent some time updating my journal in the very nice common area while watching Frankenfish with a couple of the other hikers. Throughout the night hikers continued to come in from the trail so I’d direct them to Chuck. It’s officially the start of AT season with several hundred hikers on the trail behind us so we’re now, (briefly), seeing the fastest ones as they pass us. Several of the later arrivals had pulled 30+ mile days to be there. I can’t even imagine doing that yet. I’m still impressed by finishing 13!

a warmer shelter we stopped by for lunch 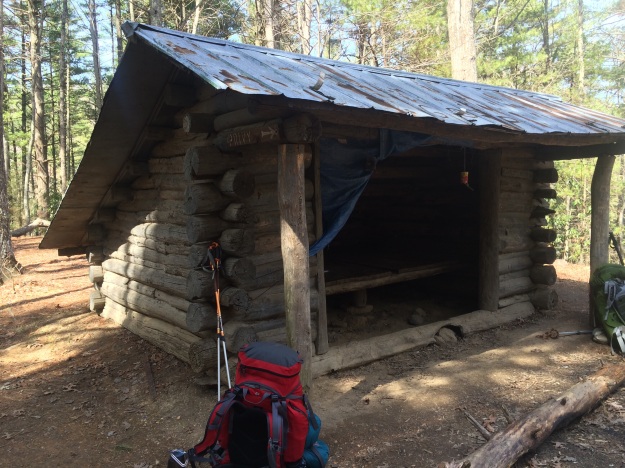