Last night we followed the instructions and hung our packs up using the bear cables. The end result was they were intact but damp in the morning. In the future B and I agreed we’ll risk the raccoons and bears and hang our packs in the shelter. We’ll still bear bag all our food though since those mice are vicious! So far they’ve been the most destructive and dangerous animal on the trail.

Well maybe not… All yesterday we had seen wild boar marks along the trail where they had been digging up roots and grubs. Today though we had a couple of encounters with them. While hiking we ran into Dundee Frost, (surprisingly not an Australian), who was scanning the bushes. He said that he had just seen three boars and what freaked him out was they weren’t particularly scared of him. Hey if you had razor sharp tusks you wouldn’t be scared of a through hiker either! We all agreed to travel to the next shelter together in case we ran into more boars. That was a good plan since we did end up seeing some later. During daylight hours wild pigs usually aren’t aggressive but still “usually” isn’t the most comforting word when you are hiking in the woods. We all agreed if we did have to defend ourselves we’d roast that sucker on our hiking poles after killing it! What’d really happen in reality is I’d cower in a tree if one charged us, but it’s a nice fantasy to have.

Luckily no boar slaying was required. It was a nice day hiking and we all took a half mile detour to another shelter off the trail since it had a privy vs a “bathroom area” plus a shovel. It’s amazing how what we consider a luxury changes as time goes on.

When we arrived at our final shelter for the day we found it was mostly full of Notre Dame students doing a guided tour for spring break. It was a good group and it was fun seeing the instructors teach them how to cook and camp. I’m very glad I have my basic Jet-boil for boiling water and Mountain House dehydrated meals as it’s a heck of a lot easier to prepare than real food. Through hikers are some of the worst campers since if things start getting complicated, heavy, or take too long we just don’t do it. It might help though if when preparing for a through hike we actually took more classes to learn how to do things the right/fun way vs endlessly discussing pack weight on Facebook…. 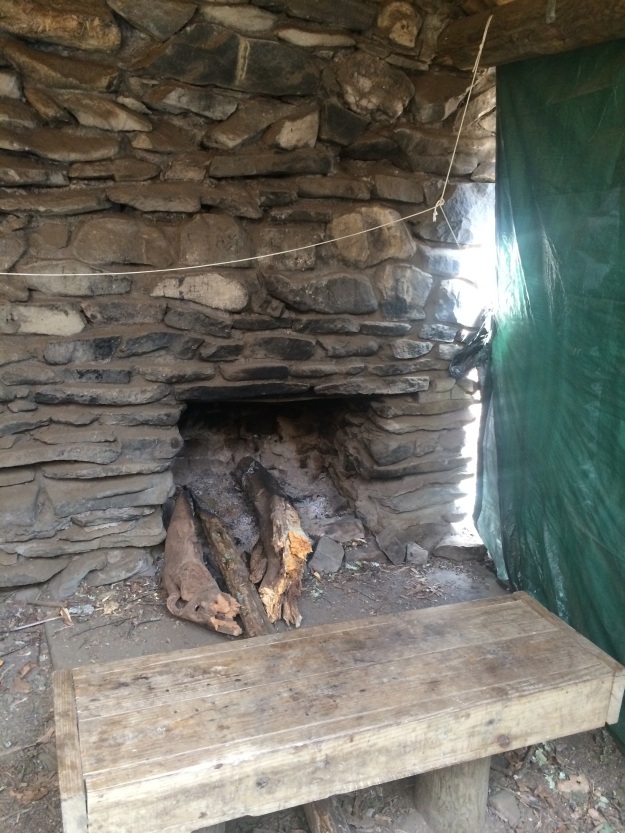 Not the most effective way to repair your boots…