Woke up this morning to light hail and rain. I ended up staying in my tent until it stopped around 7:30ish. It wasn’t that cold though which was a plus. A common theme lately has been the days being nice but the nights being freezing. Apparently it might start dropping into the low teens in the near future so I’m certainly glad I went with a zero degree bag. Luckily though it hasn’t stayed below freezing for long which makes life a lot easier. For example finding water in a liquid form hasn’t been a problem yet.

Leaving camp turned out to be more difficult than expected since it was a distance from the trail and there were a ton of surrounding campsites. Basically it was a maze and we all got turned around a bit before we saw our first white blaze of the day.

The big event of the hike today was we finally left Georgia and are now in North Carolina! Everyone celebrated a bit when crossing the boarder. I can see why the boarder was where it was since it marked the entrance to a fairly significant mountain range. Long story short, there was a whole lot of “up” today. I heard it said before that North Carolina doesn’t believe in evolution or switchbacks, and I’ll attest to the second with the trail going straight up those mountains. The highlight for me though was there was one turn off that I spotted that ended up having the most spectacular view so far. It also had a great climbing tree so I was happy.

We rolled in to the shelter around 3:30pm. The next shelter was about six miles away and campsites were sparse so we decided to stay. The North Carolina shelters are much less well maintained than the ones in Georgia. I guess that’s because much less people actually make it this far ;p

Our original hiking bubble is starting to break up with some of the people testing their legs and aiming for higher millage days. We’ve also been joined by several hikers from the bubble behind us. I’m now seeing how cool the shelter logs are now that I’m seeing familiar names in them.

I ended up grabbing a quick nap after setting up my tent which was wonderful. After finishing my dinner, (cheese, pepperoni, and dried fruit), I went back to my tent to get fully caught up with my journal. As I’m writing this I’m listening to the owls hoot nearby. Today was a good day. 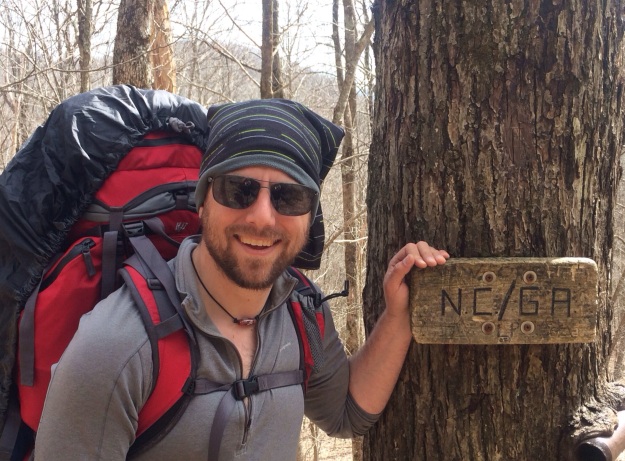